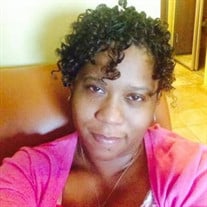 Anterica Takeishesthelle Towne, affectionately known as “Peachy”, was born to Marvilla Jarrett and Walter Towne on February 9, 1978, in Helena, Arkansas. Anterica’s Christian journey began when she was baptized and joined New Haven Missionary Baptist Church in 1983 under the leadership of the late Reverend G.G. Brown. She was very active in the church as a youth and as an adult, she was a member of the Youth and Young Adult Choir, and was especially known for her song, “I’ll go if I have to go all by myself”, now mind you, she led other songs, but that one, that was her song and she sang it from her heart. She served in other auxiliaries and activities, such as Vacation Bible School, Sunday School, and BTU. She always served her Lord and Savior with a willing spirit and heart. Anterica’s Educational journey began in the Helena-West Helena School system. She graduated from Central High School in 1996 with honors, in the summer of that same year, she joined the United States Army. She proudly served from 1996 until 2009. She attended Arkansas State University and graduated in 2000 with a Bachelor’s degree in Physical Education. In 2011 she graduated from Cambridge College with a Master’s in Education with counseling privileges in Arkansas, Tennessee, and Mississippi, and she recently graduated in December 2020 from Arkansas State University as an Education Specialist. She worked for the HWHSD for many years as a substitute teacher, physical education instructor, and a assistant basketball coach. She worked in the Lee County school district as an elementary school counselor and an assistant basketball coach until her health changed. Anterica was a member of the New Bethel #324 Order of the Eastern Star of Helena-West Helena, AR. “Peachy” was full of love, and she always saw the best in people. If she was able to help, she would, with no hesitation. She had a special way to connect with everyone; she shared unique relationships with anybody she encountered. She loved God and gently reminded others that a relationship with him was the important thing to have. She was overflowing with positivity; she even wrote an A-Z Journal on Positivity. She strongly believed that the first way to be blessed is to bless others. She understood the principle of having a friend meant to show yourself friendly. Peachy strongly believed in family and loved hers with her whole heart! Even in her recent battle, she remained positive and in high spirits. Anterica is preceded in death by her grandparents Elbert “Al” & Queen Esther “Mama Queen”, Modie and Aaron Towne; aunts, Mattie Tribue, Willieann Wilcox and Jerlene Jarrett; godmother, Ersaline Bryant, and several cousins. Anterica leaves to cherish her loving memory, three children in whom she was extremely proud of, Xayana Harvey, Antion (AJ) Edmond, and Nazir Baylark of Jonesboro, AR; parents, Marvilla Jarrett of West Helena, AR; and Walter (Vanessa “Mama Nessa”) Towne of Jonesboro, AR; three brothers, Amoson (Seymone) Bryant, Jr of Dallas Texas, Alan (Shelby) Towne and Walter “JT” (Lavella) Towne of Jonesboro AR; three sisters, Antoinese Jones of Helena, AR, Kimberly Woodard of Jonesboro, AR and Jennifer (Isaiah) Curtis of Birmingham, AL; and a host of nieces, nephews, uncles, aunts, cousins, co-workers, students, and friends.

The family of Anterica Takeishesthelle Townes created this Life Tributes page to make it easy to share your memories.

Send flowers to the Townes family.