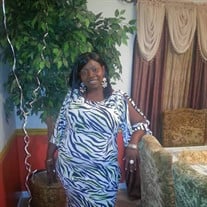 Clemmie Ayers Parker peacefully departed her earthly journey on September 11, 2020 accompanied by her two sisters Lahoma and Marcia Ayers at Vanderbilt Hospital in Nashville, TN. Clemmie entered this life on January 9, 1970 to Maggie Kirkwood Ayers and the late Levelle Ayers in West Helena, AR. She was the 9th child out of 11 children. Growing up in her younger years Clemmie loved to sing and dance. She joined the church choir and the choir at school. Clemmie went on to be enter into a contest for her beautiful voice and won The Really Big Shoe and The Showboat. She was an intelligent and well-educated woman, she attended Central High School where she made lots of friends, shared laughter, and created tons of memories. Clemmie was a graduated of the class of 1988. In that same year she gave birth to her first-born son Rakim Robinson. Three years later in 1991 she gave birth to a baby girl Carla Ayers, Clemmie was an outstanding mother of two. In her transition period Clemmie accepted Jesus Christ as her Lord and Savior while in wordship at home. She instilled the word of God into her children and spread Gods word to everyone she encountered. In the year on 1997 on December 20th she went to marry the love of her life Elton Parker who precedes her in death. She loved to be of great service to people. She worked for the Department of Health for a massive time, and Crest Park taking care of the elderly. Clemmie also served in the Helena West Helena School District for over 20 years. She later went to obtain her master’s degree in early childhood education in 2017 at Liberty University completing her journey. Clemmie is preceded in death by her father Levelle Ayers, her husband Elton Parker and an incredibly special brother in Christ Michael Thompson. Her sister Marginail Ayers, Her grandmothers Maggie Kennedy, Teresa and Greene Ayers and her grandfather Robert Kirkwood. Clemmie leaves to cherish her beautiful memories: Her two loving children Rakim Robinson of Conway, AR; and Carla Ayers of West Helena, AR; Five Brothers: Calvin Ayers, Alfred Ayers, and Rodney Ayers all of Los Angeles, CA; John Ayers of West Helena, AR; and Palmer Ayers of Little Rock, AR; Four Sisters: Veola Ayers and Hollie Ayers both of West Helena, AR; Marcia and Lahoma Ayers both of Antioch, TN; Her special sisters Alesia Taylor of Jonesboro, AR; and Monica Turner of West Helena, AR; Her grandchildren Ryan Burton, Rayvion Robinson, and Case Ayers. A special Aunt Ms. Honey Williams and her favorite niece Crystal Davis and a host of Aunts, Uncles, Nieces, and Nephews who will miss her tremendously. Due to COVID-19 and the CDC guidelines we are strongly advising everyone to social distance by keeping 6 feet apart during the services of Mrs. Clemmie Ayers Parker. Please be advised we know that this is a time of sorrow, but please follow the directions of our Directors. We are asking before arrival at the facility please wear your face mask to enter. Remember to keep your distance away from the next person not traveling or living with you. Eveyone must wear a mask before entering the facility.

The family of Clemmie Ayers Parker created this Life Tributes page to make it easy to share your memories.

Send flowers to the Parker family.