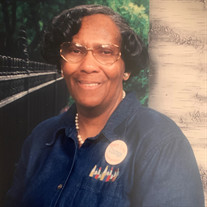 Inez Davenport Davis was born on November 22, 1941 in Clarendon, AR. She was the youngest child of Ottaway Davenport and Bertha Littlejohn Davenport. Inez departed this life on December 13, 2019. Inez was educated in the Marvell Public School System and attended Arkansas AM&N in Pine Bluff, AR. She graduated with a bachelor’s degree in Elementary Education and began a wonderful career as a first-grade teacher. Most of her career was spent at Helena Crossing Elementary School. She made lifelong friends and impacted the lives of hundreds of students over the course of her more than 40-year career in education. Following retirement, Inez was actively involved in the local chapter of AARP and the Arkansas Retired Teachers Association. She also became an active member of Second Baptist Church in West Helena, AR where she served faithfully until her health began to fail. She was always willing to lend a helping hand whenever it was needed. Inez was preceded in death by her parents, four brothers, and three sisters. She was the last surviving child from the union of Ottaway and Bertha. Inez leaves to cherish her memory, her husband of 52 years, Welton Davis, Jr. She leaves her loving children: Serlicia (Terrance) Washington of Cordova, TN, Welton (Annmarie) Davis, III of Jacksonville, FL, Angela (Gregory) Walker of Winston-Salem, NC, and Terrence (Melanie) Davis of Lexa, AR. Also left to cherish her memory is a close nephew who was like a son, Ottaway (Linda) Davenport of Lawton, OK. Her grandchildren will also cherish her memory: Candace, Jahlon, Kristan, Trayvond, Wrachel, Travis, Adrianna, Tequila, Tyler, Terrion, and Joseph. She has one great-grandchild to cherish her memory, Chyanne. She also leaves a host of nieces, nephews, cousins, and friends.

Inez Davenport Davis was born on November 22, 1941 in Clarendon, AR. She was the youngest child of Ottaway Davenport and Bertha Littlejohn Davenport. Inez departed this life on December 13, 2019. Inez was educated in the Marvell Public School... View Obituary & Service Information

The family of Inez Davenport-Davis created this Life Tributes page to make it easy to share your memories.

Send flowers to the Davenport-Davis family.