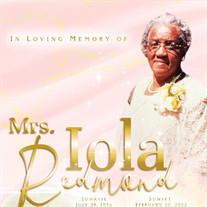 Mrs. Iola Redmond ‘Dee’, ‘Little Sister’ daughter of the late Jobie Early Sr. and Mary Henry Early was born July 28, 1926 in Helena, Arkansas. Iola was the third child of eight. She professed her faith in Jesus Christ at an early age at the Saint Mary Church in Wabash, AR. She moved to West Helena with her Mother and siblings in 1956 and joined the True Vine Missionary Baptist Church. She was a faithful and dedicated member of the Senior Choir for many years. It was at True Vine that she met her future husband, Clyde Redmond Sr. They married and were blessed with five children. She was a quiet and family-oriented woman who loved her family and community. She quietly departed this life on Sunday, February 27, 2022 in Memphis, TN surrounded by her children. Preceding her in death were her parents, Mary Henry and Jobie Early Sr. Brothers LeRoy Early, Elias ‘Jay’ Early, Jobie Early Jr, Roosevelt ‘Peter’ Early, David ‘Fank’ Early, and her sister Thelma ‘Tut’ Franklin. Her beautiful life will forever be cherished in the lives of her children; Eloise Jackson, Vivian Redmond, Cynthia Redmond (Jeff Dyer), Janice Redmond (Mike Holton), and Clyde Redmond Jr. And Grandchildren: Monica Redmond, Marcus Jackson, Michelle Banks (Terrence), Melody Jackson, and Clayton Dyer. She was blessed with one Great Grandchild Madelyn Banks. She is survived by her Sister Alma Taper of West Helena, AR; two Sisters in Law Lendora Early of Crossett, AR and Ann Early of West Helena, AR. She was blessed to have a host of adoring nieces, nephews and loving friends who will miss her dearly. Please out of respect for the Redmond family we ask everyone in attendance at Mrs. Iola Redmond's service to please wear a face covering before entering the facility. If you do not have a face-covering one will be provided to you. Furthermore, we ask that you follow the direction of our directors. Hand sanitizer and face-covering will be provided by one of Stephens Funeral Home Directors

The family of Iola Redmond created this Life Tributes page to make it easy to share your memories.

Send flowers to the Redmond family.