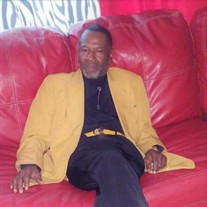 Jeff “Rooster” Clark, 66, departed this life on June 22, 2020 in Toledo, Ohio. Jeffery Lee Clark was born January 8, 1954 to the late Joe Clark Sr. and Willie Mae Clark Pittman in Helena, Arkansas. Jeff accepted Christ at an early age and was baptized at Pleasant Joy Missionary Baptist Church, Calico Bottom. Jeff was not a stranger to anyone, even those he met on the streets or in a store. He would find a way to strike up a conversation with those he came in contact with. He had a heart of gold, always willing to give. One of his favorite sayings was “Is there anything else you want?” Jeff had a reputation of spoiling kids whether they were his grand kids or any kids he came in contact with. His two must haves were his coffee and his beer. Jeff was preceded in death by his parents, his brothers, Eddie Clark and Naycola Clark, his sisters, Claudia Mae Clark and Abigail Williams. He leaves to cherish his memory: three sons, Brian Anderson and Jacoba Clark of Toledo, Ohio, and Ja’Cion Clark of Dallas, Texas; three daughters, Jackie Clark of Memphis, Tennessee, Kesha Anderson and Cynthia Anderson of Toledo, Ohio; six brothers, Joe (Bettye) Clark, Jr. of Dumas, Arkansas, Melvin Clark and Cornell (Poncho) Clark, of Helena, Arkansas, James Clark, Sr. of St. Louis, Missouri, Darrow (Vonda) Clark of Norfolk, Virginia, Michael Clark of Pine Bluff, Arkansas; four sisters, Clee (Ben) Price of Houston, Texas, Patricia Ashanti of Little Rock, Arkansas, Vivian (Charles) Holloway of Jacksonville, Arkansas, and Shirley Clark of Pine Bluff, Arkansas; one uncle, Eddie B. Anderson of Detroit, Michigan, two aunts, Louise Anderson and Alzer Lee Bates of Cleveland, Ohio;A host of grandchildren, nieces, nephews, cousins and friends. Due to guidelines issued from the federal government and the Center for Disease Control it is recommended that gatherings should not exceed 10 people in order to limit the risk of spreading COVID-19. We are strongly advising everyone to stay 6 feet apart during Mr. Jeffery "Rooster" Clark funeral services. Please be advised that this is a time of sorrow for many, but please go by the directions of our funeral directors so that we can insure the safety of Mr. Clark family and those who attend. We apologize for any inconvenience this may have caused for our families; yet it is imperative that we obey the law and do our part and keep the spread of this virus down. Respectfully Stephens Funeral Home & Staff

The family of Jeffery "Rooster" Clark created this Life Tributes page to make it easy to share your memories.

Send flowers to the Clark family.