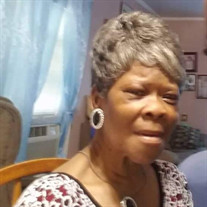 Jerlene Neal was born on July 3, 1945, in Marianna, Arkansas to R. B. and Lula Mae Neal. Her family moved to Helena, Arkansas when she was 13 years old, and attended the Christ Temple Church of God in Christ, where she was saved and received The Holy Ghost. At the age of 18, Jerlene moved to Battle Creek, Michigan to live with her Aunt Flora. There she made a life for herself. In 1974 she was called into the Ministry of The Lord Jesus Christ to preach The Gospel, while attending the Full Gospel Deliverance Center, being known as an Evangelist reaching out to the lost souls in Battle Creek. Jerlene met and married Mr. Charles Booth, and was blessed with a son, Terrill Deland in 1978. Unfortunately, little Terrill succumbed to a birth defect a few months after his birth, going to his eternal home. Later, Jerlene decided to move to Little Rock, Arkansas to help her aging mother. There, she met and married Mr. Frank Carter. After their marriage ended, she dedicated her life totally to assisting her mother and the Church. In 1986, she joined Word of Outreach Christian Center, under the leadership of Bishop Robert E. Smith, Sr., where she served as a Loving Mother in Church Life. Two of her greatest passions were: 1) being The Heart of the Wise Women Builders of the House Women’s Ministry of Word of Outreach, and 2) Director of the Word of Outreach Family Life Development Center’s Food Pantry. Mother Carter would seek out various means of acquiring food to feed the hungry, and those who would come to her expressing their need for food. She took The CALL of being a Heart and Mother of the Esther Group very seriously. She was a stickler about her and her daughters being Rightly and Fully Connected with the Vision of The Lord and her Bishop. As a spiritual mother, with many sons and daughters, she was constantly in PRAYER, many knowing that her special time to pray was at midnight. She was preceded in death by her parents, R. B. Neal, and Lula Mae Neal Glenn, two brothers, Mercy Dee Glenn and Thurman Glenn, and sister, Lillian Glenn. She leaves to cherish her memories three brothers, Terry (Joyce) Glenn, Reginald Glenn, Ricky Glenn, all of Little Rock, Arkansas, three sisters, Earlene (Theodore) Baker, of Little Rock, Arkansas, Marie Taylor of Battle Creek, Michigan, and Patricia Glenn, of Decatur, Georgia, and a host of nieces, nephews, and cousins. Mother Jerlene Carter’s commitment and dedication to the family of God was very profound. Thus, her spiritual family will also cherish her memories. Her special "mommy,” Mother Eddie Jean Leak, two special spiritual sons and daughters, Roger and Regina Doyne, Patrick and Lakesia Thames, Colissia Boons, LaTressa Easley, grandchildren, brothers, and sisters in Christ, will all expectantly be awaiting her to be raised from the dead FIRST. And, as the Holy Bible declares, then those who are alive, will be caught up together with her in the clouds, to meet the Lord in the air, and so shall we ever be together with each other again (1 Thessalonians 4:13-18).

Jerlene Neal was born on July 3, 1945, in Marianna, Arkansas to R. B. and Lula Mae Neal. Her family moved to Helena, Arkansas when she was 13 years old, and attended the Christ Temple Church of God in Christ, where she was saved and received... View Obituary & Service Information

The family of Jerlene Carter created this Life Tributes page to make it easy to share your memories.

Send flowers to the Carter family.