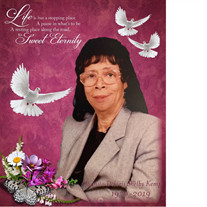 Juanita Deloris Shelby Kemp peacefully departed this life and went home to be with the Lord on Thursday, October 24, 2019 at the home of her daughter who had been her caretaker. For ten years, she valiantly fought Alzheimer’s disease. Born in West Helena, Ar to Hiram and Gertrude Hill on September 27, 1930, she was here dad’s “lil bit” and the eldest of their nine children. Four brothers- Arnell, Jewel, Travis, and Ray and four sisters-Maxine, Yvonne, Bobbie G, and Joyce soon followed to become her students, her serfs, her work crew, and her loyal subjects. Known as “Lois” to family and friends, she graduated from Eliza Miller a High School with the class of 1949. Lois homier Columbus L. Shelby In holy matrimony on September 17,1950 and travelled the USA as a military bride. They were blessed with five children – Mona Lisa, her oldest (who died in infancy), Linda Kay, Vernon Columbus, Kim Wenona, and Constance Yvonne-named for her sister. Later in life, Lois married Robert Kemp. They remained husband and wife for more than thirty years until his death in 2015. Once her children were up in age, she began her career. Juanita was the first manager of the Buccaneer’s Drive in. She helped integrate the staff of the Revenue Office in Helena and then transferred over to work for the next 26 years in the Department Of Human Services. She was a family caregiver in the broadest sense of words. She helped to care for her grandmother, her uncle, her father, her mother and serval in-laws. She was a consummate community volunteer and church worker. She especially loved working with children and in young people’s activities. She did not hand out candy, but always handed out the best of “snacks” such as popcorn balls, cupcakes, and Carmel apples for Halloween. Her 4-hers, girls and boys, were always the best cornbread cooks in their families. She was a dedicated Central High band booster from her oldest to her youngest child. Lois was preceded on her Heavenly journey by her parents, Hiram and Gertrude, three brothers- Arnell, Jewel, and Travis, her beloved “dumpling” Mona Lisa with her daddy, Columbus, and her sweet Grand-babies’ Mom, her own precious Samella whom we believed were all waiting at the pearly gates to welcome her home. Juanita was a devoted Daughter, Sister, Mama, Auntie, Grandma, Cousin, Friend, Neighbor, Youth program sponsor, Church Matron, 4-H leader and the list goes on. She will be deeply missed by her family, many friends, and appreciative community. She leave to cherish her memories her children- Linda K. Shelby of West Helena, AR; Vermon C. Shelby of Nashua, New Hampshire; Kim Shelby Watson of Pennsauken, New Jersey; Constance Shelby Barnes (Victor) of San Antonio, Texas; and her “other daughter” Juanita Seaton of West Helena, AR; Nine Grandchildren-Angie, Vermon Jr., Marcus, Kimberly, Lena, Jodie(Tre), Vic Jr., Caleb, and Simeon; 12 Great Grandchildren and two great, great grandchildren; one brother, Carl Ray Hill (Phyllis) of Newark, Delaware; four sisters, Maxine Hill Vasser of Detroit, Michigan; Yvonne Hill Fleming (Bill) of Memphis, Tennessee; Bobbie Hill Jenkins of Detroit, Michigan; Joyce Hill Burns (Charles) of Sherwood, Arkansas; a devoted brother-in-law, Robert R. Shelby of Little Elm, Texas and a host of nieces and nephews, brothers and sisters-in-law, cousins, and relatives and friends.

Juanita Deloris Shelby Kemp peacefully departed this life and went home to be with the Lord on Thursday, October 24, 2019 at the home of her daughter who had been her caretaker. For ten years, she valiantly fought Alzheimer&#8217;s disease. Born... View Obituary & Service Information

The family of Juanita Deloris Shelby Kemp created this Life Tributes page to make it easy to share your memories.