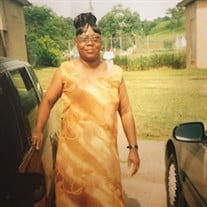 Maxine Henry was born, February 3, 1950 in Aubrey, Arkansas to the late Mack Henry and Mozella Henry. Maxine departed this life on May 17, 2020 in Springdale, Arkansas, surrounded by her family. She worked at Tyson food and a cook for Perry... View Obituary & Service Information

The family of Maxine Henry created this Life Tributes page to make it easy to share your memories.

Send flowers to the Henry family.