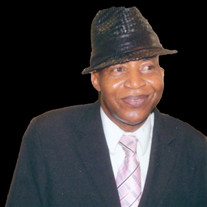 Sherman Edward Jordan was born in Lexa, Arkansas on March 11, 1951, to the late Sim and Ernestine Jordan. He was the sixth of their twelve children whom they loved and adored. Sherman confessed a hope in Christ and was baptized at a young age at Paradise # 2 Missionary Baptist Church in Lexa, Arkansas. He was a member of Antioch Missionary Baptist Church in Aubrey, Arkansas before becoming a member of Hampshire Missionary Baptist Church in Aubrey, Arkansas until his health failed. Sherman attended Anna Strong High School in Marianna, AR. After graduating high school, he enlisted in the Army. After serving in the army he served in the construction industry for many years. He loved basketball, plants, telling jokes, cars and building projects. Sherman had a heart for giving and a personality that could not be overlooked. Sherman was proceeded in death by his sister: Retha Dale Jordan, brothers: Sim Jordan Jr., Alfred Jordan, Samuel Jordan, Michael Jordan and Curtis Jordan. Sherman leaves to cherish his memory two daughters and one son: Sydney Jordan, Shermain (Ken) Reed, and Antonio Vaughn Sr.; one brother: John Wesley Jordan (Barbara); four sisters: Emma Nelson (Arthur), Rosie Staples (Albert), Dolores Willis, and Linda Palmer (David Sr.); grandchildren, nieces, nephews, cousins, friends and acquaintance. John 10:27–29 "My sheep hear my voice, and I know them, and they follow me. I give them eternal life, and they will never perish, and no one will snatch them out of my hand. My Father, who has given them to me, is greater than all, and no one is able to snatch them out of the Father's hand." The Good News: We are the flock of God’s pasture. We follow Him through this life and into the next. Nothing can separate us from His tender care. A Note of Thanks: Sherman’s family would like to express their appreciation for all your prayers, visits, gifts and thoughtfulness during this time. Many of served as a beacon of light and a support system for Sherman when his heath failed. We pray that Proverbs 11:25 will manifest in your life for the bible tells us that, “A generous person will prosper; whoever refreshes others will be refreshed. Thank you.

Sherman Edward Jordan was born in Lexa, Arkansas on March 11, 1951, to the late Sim and Ernestine Jordan. He was the sixth of their twelve children whom they loved and adored. Sherman confessed a hope in Christ and was baptized at a young age... View Obituary & Service Information

The family of Sherman Edward Jordan created this Life Tributes page to make it easy to share your memories.

Sherman Edward Jordan was born in Lexa, Arkansas on March 11,...

Send flowers to the Jordan family.