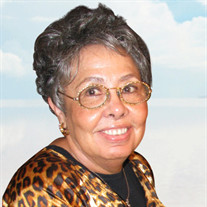 Trudy Lester Miller was called by the angel of peace to her place of eternal rest on Friday, August 30, 2019. Trudy was born on September 23, 1937, in Pineview Georgia, the youngest of five children born to Walter and Adrienne Lester. She died at home with her family. Trudy is survived by her daughter Maxine Dawn Miller and three sons Robert Dan Miller III, Brian Stacy Miller (Monique), Kyle Trevor Miller, her sister Precious Johnson and eight grandchildren Robert Miller IV(Tomoka), Elijah Miller, Zoe Miller, Abraham Miller, Alexandria Miller, Adrianne Miller, Brian David Miller and Eliza Miller. She is preceded in death by her husband Dr. Robert Miller, parents Walter and Adrienne, brothers Fred, William and James Lester, and her beloved grandson George Miller Trudy graduated from Hawkinsville (GA) High School in 1955. After caring for her grandmother until her death, she attended Tennessee State University, where she graduated in 1963 with a Bachelor of Science degree in Social Administration. She and Robert married while he was a resident at Meharry Medical College. In 1965, Trudy and Robert moved to Helena where they raised their children. After working as a stay-at-home mother, when Trudy’s youngest child, Kyle, entered junior high school, at the age of 44, she went back to school to pursue her dream of being a licensed social worker. Trudy received her Masters of Social Work from the University of Tennessee School of Social Work in 1986. Trudy worked as a social worker at the Phillips County Developmental Center, the Phillips County School for Exceptional Children, the Baptist Rehabilitation Center, Kidney Care, Methodist Hospital, and for Phillips County Social Services. Trudy gave many hours of service to her community as Deputy Treasurer for Phillips County in 1984, hours as a member of the Phillips County Welfare Board, the Phillips County Mental Health Board, the National Council for Exceptional Children, and Delta Sigma Theta Sorority. She was an elected member of the Phillips County Quorum Court from 1999 to 2005. Trudy was a longtime member of Centennial Baptist Church and served on the board of the E.C. Morris Foundation. When Centennial closed, she became a member of New Light Missionary Baptist Church, where she greatly appreciated her church members and enjoyed the choir. Trudy was a very tough woman, who dedicated her life to raising her children with a firm but loving hand. She believed in honesty in love as a rule. Her integrity and commitment to holding on to what is true ruled her decisions in both public and private.

Trudy Lester Miller was called by the angel of peace to her place of eternal rest on Friday, August 30, 2019. Trudy was born on September 23, 1937, in Pineview Georgia, the youngest of five children born to Walter and Adrienne Lester. She... View Obituary & Service Information

The family of Trudy Lester Miller created this Life Tributes page to make it easy to share your memories.

Trudy Lester Miller was called by the angel of peace to her place...

Send flowers to the Miller family.