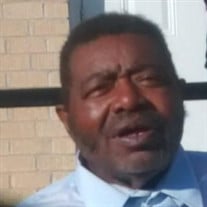 Walter Vaughn Sr. was born December 16, 1945 to the late Beulah Mae Vaughn in Popular Grove, Arkansas. Walter confessed his love for God at an incredibly young age. Even with his health issues he kept his faith in God until the end. He did not suffer as the time drew near for him to take his final breathe. Walter worked for a company before he decided to start his own business. He was a mechanic and loved working on cars. He worked at his own mechanic business for many years before going to work for the City of West Helena. Whether he worked on your car or a family members’ car he loved being a mechanic and fixing on cars. No matter where he went, he never met a stranger. There were many times when he would go to the doctor, and he would see a friendly face and he would say “Don’t I know you” and guess what he would because he had worked on a car or truck or something of theirs. He is proceeded in death by his parents Beulah Mae Vaughn Gilyard and MC Gilyard; four brothers - Ed Vaughn, George Vaughn, Earl Vaughn, and MC(Peanut) Gilyard Jr. three grandchildren – Kalil Vaughn, Shamarkis Gary, and Jennifer Gray. He leaves to cherish his memory his wife Lucy Mae Vaughn; two brothers - Floyd Vaughn and June Vaughn; four sisters – Ruby Vaughn, Ora Sparks, Mack Vaughn, and Rosette Vaughn; ten children – Delores Coakley, Beulah Vaughn, Walter (Earnestine) Vaughn Jr, Clifford (Alicia) Vaughn, Davion (Kerrissa) Vaughn, Anna (Garry) Vaughn, Christopher (Janice) Vaughn, Jamie (DJ) Lee, Kayla (Raymond) Gary, and Jennifer Vaughn; thirty-four grandchildren; eleven great grandchildren; and a host of nieces nephews and friends To decrease the chance of harming the family of Mr. Walter Vaughn family and the health of others by COVID-19, masks are required to enter the facility and the number of persons allowed inside the building will be reduced. If the capacity is filled, please limit your visit to 10 minutes at a time to allow others to gain access.

Walter Vaughn Sr. was born December 16, 1945 to the late Beulah Mae Vaughn in Popular Grove, Arkansas. Walter confessed his love for God at an incredibly young age. Even with his health issues he kept his faith in God until the end. He did... View Obituary & Service Information

The family of Walter Vaughn created this Life Tributes page to make it easy to share your memories.

Send flowers to the Vaughn family.